There’s more for NBA from Africa—Kagame

The reception was also attended by his Kenyan counterpart President Uhuru Kenyatta, NBA Commissioner Adam Silver, Larry Tanenbaum, NBA Chairman of the Board of Directors, among others.

Speaking at the event, President Kagame commended NBA’s effort to nurture and scout African basketball talents to play for the world’s most prestigious league.

He however noted that there’s more that could come from the continent.

“Thank you for keeping Africa at the centre of what can be done globally especially when it comes to identifying talents that are there in Africa,” Kagame commended NBA officials.

“In the NBA there have been many Africans but there are many more who can qualify to be there,” President Kagame said.

The Head of State also noted that picking some African players to join the coveted Basketball league exposes them to several other opportunities including better education among others. 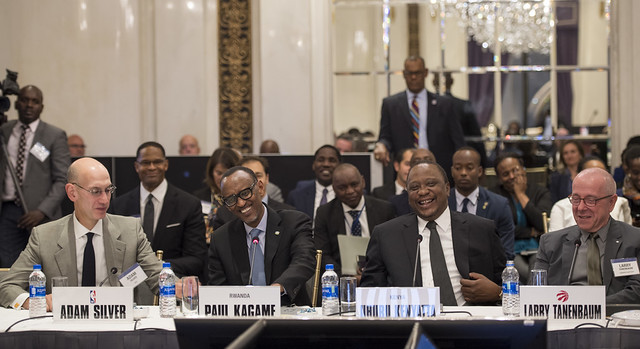 Ujiri, a Nigerian professional basketball executive, former scout and former player, is also the founder of the Giants of Africa project, an initiative that seeks to provide African youth access to professional Basketball training and to empower them to achieve their full potential.

Also present at the opening event of the three-day camp was Mark Tatum, NBA Deputy Commissioner and Chief Operating Officer, Amadou Gallo Fall, a native of Senegal and the Vice President and Managing Director of NBA Africa among other officials.

Last year, the Giants of Africa project launched the refurbished Rafiki Basketball Court in Nyamirambo as part of their outreach activities on the continent.

Kagame paid tribute to some of these Basketball legends with African roots for “looking back” at their continent and giving back similar opportunities to the young people.

“They come from Africa, they had these opportunities and now they are looking back and saying where we come from there are many more,” he said.

Kagame also commended Tanenbaum, the NBA Chairman of the Board of Directors for investing in NBA which is providing Africa's young people with immense opportunities.

“Thank you Larry for giving your weight to this, your time and investment into this,” he said.

Kagame added; “It is not just one country. We want to work together as a continent, come together around this project of taking another step for Africa in our development.”

Follow https://twitter.com/AthanTashobya
Tags:NBAAfricaBasketball
You want to chat directly with us? Send us a message on WhatsApp at +250 788 310 999