President Paul Kagame has called for increased partnership between multiple players in the Northern Corridor to fast-track the development of citizens.

The President was speaking at the 14th Summit of the Northern Corridor Integration Projects (NCIP) held in Nairobi, Kenya.

The summit, hosted by President Uhuru Kenyatta of Kenya, was the first  Northern Corridor summit to be held since 2016.

During his speech, President Kagame called for the re-examining of required efforts to enable the implementation of joint projects that will develop lives of citizens.

“We had made headway in bringing government, businesses, local and foreign investors in partnership to enable these projects that are important to the development of our citizens,”

“There is always going to be a lot of work to do but this moment provides an opportunity to re-examine what has been done and what we still need to do,” the head of state said.

During the summit which was preceded by a ministerial meeting, the leaders reviewed the progress made in the implementation of the various resolutions reached at the 13th Summit.

Among the key projects that featured prominently during the meeting is the Standard Gauge Railway (SGR) which is supposed to connect the port of Mombasa to Kigali via Uganda.

On this, the leaders directed that application for financing of Kampala–Bihanga–Mirama–Kigali, Tororo-Gulu–Nimule/Gulu–Pakwach sections be expedited.

The leaders commended the implementation of a modern railway network in Kenya as part of the first phase of the SGR from Mombasa to Nairobi.

The preliminary engineering design of the new SGR line from Kampala to Kigali was completed in January 2018.

In the joint communiqué, the East African leaders reaffirmed their commitment to advancing regional integration while underscoring the importance of accelerating socio-economic transformation, industrialisation and employment creation.

President Kagame: I thank President @UKenyatta for hosting and re-convening us after a two-year break to continue with the momentum we had started for our region, coming together and working on joint projects for the benefit of our countries and people.

To ease the circulation of petroleum products in the region as a key source of industrial and domestic energy, the leaders agreed to come up with ‘the Lake Victoria intermodal transport system’ pending consultations on re-scoping of refined petroleum products pipeline.

Further, the leaders agreed to allocate more funding for the development of centres of excellence to support creation of requisite human resource capacities needed for the implementation and sustenance of NCIP projects.

On the setting up of a commodities exchange, the Summit received an update on the harmonisation of standards for commonly traded commodities and directed partner states to fast track the process. 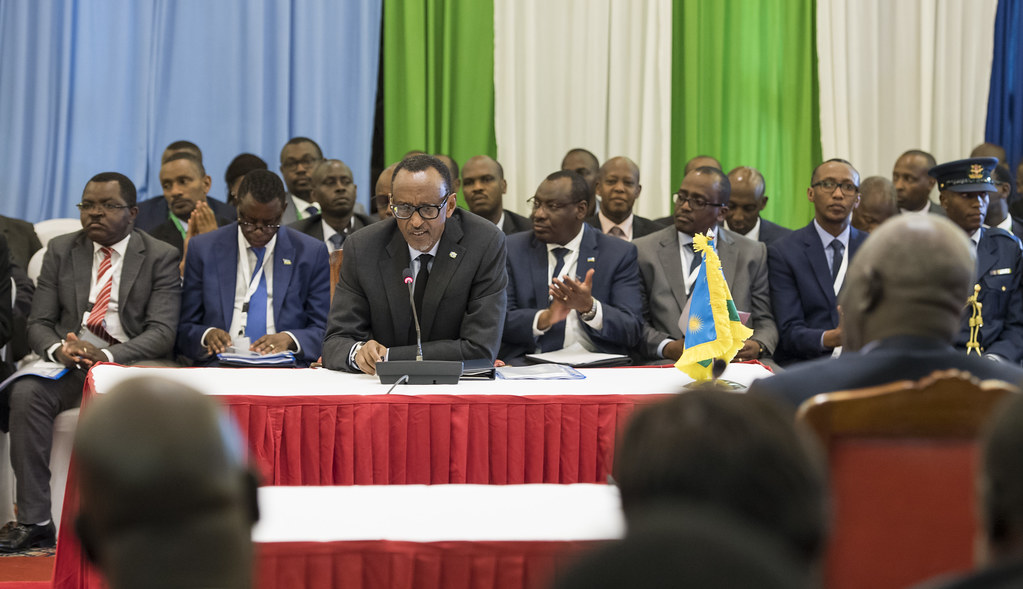 The summit also considered and adopted the Accession Treaty to the Mutual Defence Pact and agreed to finalise an agreement on the establishment of a Centralised Aeronautical Database for the Northern Corridor Airspace bloc.

The Heads of State were also briefed on the progress being made in ICT and will be keen on the status of the One Network Area (ONA) for voice which is fully operational in all the partner states, while ONA for data is operational in Kenya, Uganda and Rwanda.

Also present at the summit was President Yoweri Museveni of Uganda while President Salva Kiir of South Sudan was represented by a special envoy Aggrey Tisa Sabuni.

The summit was also attended by Kenya’s Deputy President William Ruto as well as representatives of Tanzania, Burundi and Ethiopia, countries which have an observer status in the NCIP.

Follow https://twitter.com/ByCollinsMwai
Tags:KagameNorthern CorridorNairobiEast African Community
RelatedLinks
You want to chat directly with us? Send us a message on WhatsApp at +250 788 310 999