FEATURED: Over 1800 graduate at University of Kigali

A total of 1836 students graduated at University of Kigali on December 6 after successfully completing their courses in Bachelors, Masters and Post Graduate Diploma in Education programmes.

The ceremony, which took place at Intare Conference Arena, at Rusororo in Gasabo District, was kicked off by an academic procession led by Prof. Singh Narayan, the Associate Deputy Vice-Chancellor, Academics; and Dean, School of Business and Management. The procession included University Promoters, senior academics from UoK and other institutions, lecturers and other invited guests.

UoK Vice-Chancellor, Prof. Abraham Waithima, congratulated the 2019 graduating class, adding, “Your hard work, the sacrifices that you, your parents, guardians and sponsors have made, has finally paid off”.

He outlines some of the varsity’s achievements over the last few years including being ranked 2nd in Rwanda by Webometrics, representing the country in a regional moot court competition, and engaging in a number of student exchange programmes, most recently with DHBW Ravensburg of Germany and Ivey Business School of Canada.

The VC acknowledged the contribution of staff and the dedication they have shown in “shaping the future generation of leaders” in the country and the region.

He also thanked the Promoters for continuing to cast the vision of UoK, which has “enabled the institution to grow very fast and contribute tremendously to the development of the education sector in Rwanda”.

Speaking at the ceremony, Prof. Manasseh Nshuti, Chairman, Board of Promoters, also thanked the lecturers for their hard work and support accorded to students in the pursuit of their academic excellence. He also expressed his gratitude to parents, guardians and well-wishers for the support extended to the graduands to reach their goals.

“We, Promoters of university of Kigali, have strived to give you the highest quality education you need and deserve and which the labour markets or entrepreneurial world demands of you and I have no dought that the degrees and diplomas awarded to you come with the skills and expertise needed for your future,’’ said Prof. Nshuti, an academician and co-founder of the University.

Nshuti reminded the graduands that their latest academic achievement was not the end of their academic journey as they are expected to pursue further academic qualifications that would enable them to transform their lives and that of their families and country.

Speaking on the same occasion, the University Chancellor, Dr David Macrae, said that graduation was an important event in the life of any student. “Having a university degree puts you in a special category. Your degree and the knowledge you have acquired through your studies will open doors which were otherwise closed.”

The British national and career diplomat told those in attendance that by transforming the students into becoming graduates, with all the knowledge and the skills they have since acquired, was a noble contribution to the country’s development agenda.

He acknowledged the support of the Government of Rwanda, spearheaded by President Paul Kagame, which he said: “attaches great importance to education for the development of the country”.

On his part, Philbert Afrika, Chairman, UoK Board of Directors, revealed that the Board has plans to expand the varsity through increased academic infrastructure and number of programmes to accommodate the needs of the labour market and socioeconomic transformation of the country.

He expressed his vote of thanks to the companies that helped sponsor this year’s graduation, namely; Cogebank, KCB-Rwanda Bank, Konka Group, and Simba Super Market.

The colourful event was attended by UoK Promoters, government officials, diplomats, senior officials from other Institutions of Higher Learning in the country, University managers, staff, among others.

This was the fifth University of Kigali graduation ceremony.

UoK is home to more than 7000 students pursuing their studies in Bachelors, Masters and Post-Graduate Academic programmes. 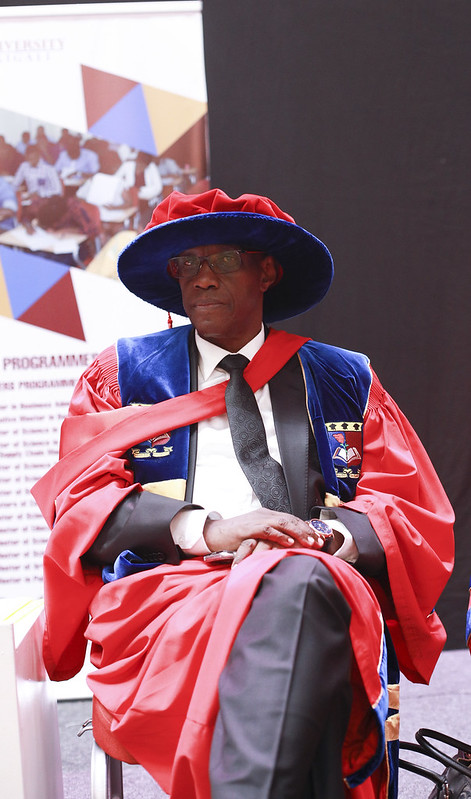